¡Aqui Estamos! A Data Profile of Latinos in the Inland Empire 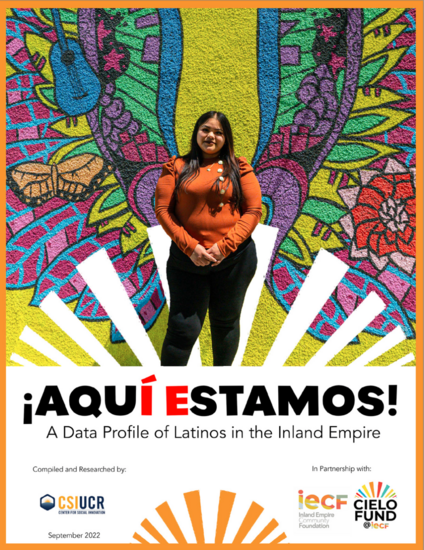 The Inland Empire is one of the most diverse and fastest growing regions in California, and central to this growth is its vibrant Latino community. Latinos now comprise a majority of the region’s population at 51.5% – an estimated 2.37 million people. Latino growth rates in the Inland Empire are significantly higher than the Southern California average. Despite this growth, the Latino community in Riverside and San Bernardino counties still face significant challenges in the areas of educational attainment, access to health care, economic mobility, and civic participation. For the Inland Empire to succeed, the Latino community must succeed and this Data Profile highlights some areas where added investment in nonprofit infrastructure and services can help this community thrive.

Key to economic mobility for countless Latino families, particularly those recently immigrated, is the aspiration of a college education for their children. While the Inland Empire has seen some growth in educational attainment among Latinos in recent years, it’s still not where it needs to be. Only 11% of Latinos in the IE have a bachelor’s degree or higher, well below the state average (35%) and the national average (33%). Latinos in the IE are also nearly only a third as likely as non-Hispanic Whites in the region to hold a bachelor’s degree or higher (11% versus 29%, respectively).

Poverty rates are also much higher among Latinos in the Inland Empire than among non-Hispanic Whites, and these gaps are even more stark when it comes to child poverty. Latino children in the Inland Empire are twice as likely as White children to live in poverty. This is a stark finding that suggests adverse and inequitable long-term consequences for the Latino community, absent investments in its successful future.

There are also some notable racial/ethnic gaps in health insurance and health outcomes. The proportion of IE Latinos without health insurance in 2020 (12%) was more than double the share among non-Hispanic White residents in the region (5%). Latino adults in the Inland Empire were also much less likely to have received a routine health check-up (60%) than White adults in the region (71%), and a higher proportion of Latinos expressed experiencing and the region saw a decline in Latino homeownership from 64% in 2010 to 60% in 2020.

In terms of civic participation, Latinos lag significantly behind non-Hispanic Whites with respect to voting. These gaps are particularly consequential, as Latinos are a majority of the region’s residents, but well below a majority when it comes to the electorate. In 2020, only 50% of eligible Latinos voted in the November election when compared to 68% of non-Hispanic Whites. Finally, the Inland Empire continues to grow its roster of Latino elected officials (197 officials, according to the latest count), although representation is still well below the Latino population’s majority status in the region. The gaps are even more severe among Latina elected officials, and point to the need for significantly greater investments in Latino civic engagement and in Latino/Latina leadership development in the region.

Despite the many disparities outlined in this Data Profile, the Inland Empire’s Latino community remains resilient. Hundreds of organizations throughout the region provide critical support and services daily to those in the region who need it most. Additional significant mental distress in the prior year (13%) when compared to White residents in the IE (11%).

Homeownership is a relatively bright spot for Latinos in the region. In 2020, Latino homeownership was significantly higher in the Inland Empire (60%) than comparable figures for Latinos in Los Angeles County (42%) and in California more generally (46%). At the same time, Latino homeownership in the region lags homeownership among non-Hispanic Whites (73%), efforts like the Cultivating Inland Empire Latino Opportunity, or, CIELO, Fund at the Inland Empire Community Foundation are stepping up to raise resources to support these organizations through targeted grantmaking. The CIELO Fund seeks to uplift and invest specifically in organizations that are led by and serve Latinos and will fund organizations providing solutions to some of the disparities outlined in the pages that follow. We invite you to read this Data Profile to better understand the areas where racial and ethnic gaps continue to persist, and to begin identifying the pathways to opportunities to strengthen, empower and uplift Latinos – and all communities – who call the Inland Empire home.