The State of Community & Ethnic Media in California: Impact, Resource Gaps, and Opportunities 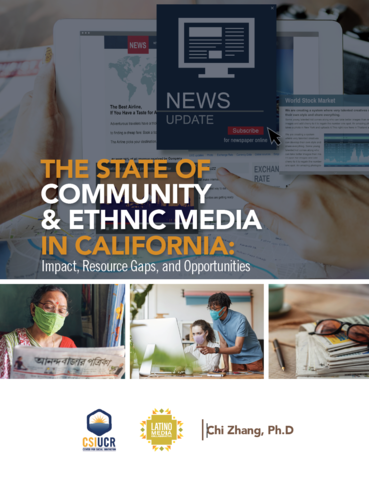 Ethnic media plays a pivotal role in sustaining the fabric of democratic life in multicultural California, informing and engaging its many minority communities. The hundreds of outlets, however, remain largely invisible and marginalized, a “giant hidden in plain sight.”1

This report combines findings from an original survey of 106 ethnic media outlets in California and 19 in-depth interviews. It documents the current landscape of the state’s ethnic media, their diversity, challenges, and impact, with a focus on gaps in government investment.

Findings demonstrate that ethnic media ensure representation of communities and give their members access to accurate, critical information. The perception of “ethnic” media as supplementary to “mainstream” media is fundamentally misguided. Ethnic media are media in their own right, and valuable assets that support a diverse, resilient communication infrastructure.

The work of ethnic media documented in this study harkens back to a long history of advocacy, identity formation, and community organizing by outlets serving the nation’s BIPOC communities. For one, the Black press, since its emergence in the 18th century, fought for liberation, instilled racial pride, and became a symbol of freedom in a system that forbade enslaved people to read. Especially in the face of today’s unprecedented, sweeping crises in public health and racial justice, the work of ethnic media must be viewed through the lens of self-representation and empowerment. Investing in ethnic media unequivocally is an issue of equity, ensuring that all communities can participate equally in economic, social, and political life.

As a minority-majority state, California has the opportunity to set a standard for investing in the work of ethnic media, ensuring their sustainability and autonomy, and empowering diverse communities.